You may remember that last year a man jumped over the fence surrounding the White House and made it all the way into the building before being taken down by Secret Service agents. After that incident, the Secret Service endeavored to make the fence more secure, without making it look off-putting. Learn the anti-climb fence solution they came up with in this week’s blog. 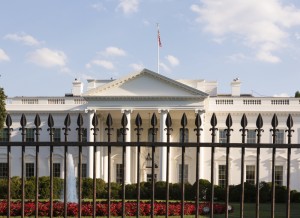 The White House is getting a new anti-climb fence improvement.

The White House fence has been upgraded with an “anti-climb feature consisting of sharp metal point,” according to a joint statement released yesterday by the Secret Service and the National Park Service.

The anti-climb feature essentially clips on to the top of the fence where the existing fence tips, also known as finials, are located. The new feature consists of sharp metal points that are angled slightly out from the fence so that there are essentially two sets of fence tips at the top. Ideally, this would make it more difficult for any would-be intruder to scale the fence.

Other security upgrades are also in progress at the White House. “The Secret Service and National Park Service plan to begin work on several vehicle checkpoints at the White House complex, installing new officer booths, and replacing concrete barrier with ‘mobile steel plate barriers which can be raised and lowered,’” according to NPR.

Hercules Fence of Richmond has been providing professional fence installation and service in Richmond for more than 50 years. Call us at (804)752-7992 or contact us on our website to learn more about residential and commercial fencing in Richmond.

Categories: High Security Fences and Uncategorized | Tags: anti-climb fence
This entry was posted on Friday, May 8th, 2015 at 5:52 pm. Both comments and pings are currently closed.