268 Fence Breaches at U.S. Airports Over Past Decade According to AP

The Associated Press recently conducted an investigation found there were “at least” 268 breaches at 31 major airports in the U.S. between January 2004 and January 2015. “Incidents included fence jumpers taking shortcuts, intoxicated drivers crashing through barriers and mentally ill intruders looking to hop flights. None was terrorism-related.”

According to the AP, “Airports say breaches are relatively rare. Security measures typically include fences, cameras and patrols, but there are gaps. Not all of the miles of fences are routinely patrolled or covered by video surveillance.” 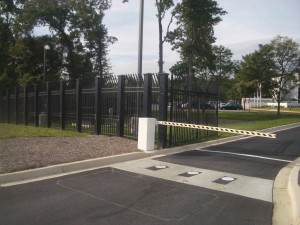 Though breach attempts are inevitable at airports and any high security facility, security fencing can help deter breaches and increase security levels at a facility. Security fences go above and beyond to provide added protection to the perimeter of any facility. Here are some of the high security fence solutions Hercules Fence of Richmond offers.

One of the most common breach attempt strategies is crashing a gate with a vehicle. Gates can be reinforced with a number of crash rated components that deter crashing attempts. This includes K-rated gates, crash-rated bollards, pop-up barriers, lift-arm gates and crash rated wedge barriers. Learn more about crash rated barriers here.

Hercules Fence of Richmond has been providing professional fence installation and service in Richmond for more than 50 years. Call us at (804)752-7992 or contact us on our website to learn more about residential and commercial fencing in Richmond.

Categories: High Security Fences and Uncategorized | Tags: security fence
This entry was posted on Friday, April 17th, 2015 at 8:56 pm. Both comments and pings are currently closed.